New Spawning Grounds of Bluefin Discovered off the USA

Off the northeast coast of the United States, scientists have detected new spawning grounds of bluefin tuna. The discovery that especially smaller tuna in the class from 80 to 500 lb spawn there while the larger ones head to the Gulf of Mexico, throws the current theory for late sexual maturity of western stocks completely overboard. That tuna are sexually mature in the west at 5 years like their cousins ??in the eastern Atlantic and Mediterranean, and not only at the age of 9 (the age of the gulf spawners), is important and good news for the preservation of the species. The spawning zone now discovered is in the open Atlantic extending from the US states of New Jersey, Delaware and Maryland and to approximately the latitude of New York in the north. Professional fishermen suspected there were spawning grounds in the area referred to as the “Slope Sea” as early as 1957.

Now the discovery of tuna larvae a few days old has proven that small bluefins remain around 20 days there to spawn in August/September. The amount that could be collected with plankton trawls was higher than the larval density in the Gulf of Mexico. Moreover, caught tuna had hormone levels typical of the spawning season. Based on these and other parameters, scientists calculated that only 32 percent of the reproduction is taking place in the Gulf of Mexico and that the Slope Sea is therefore far more important for the conservation and sustainable management of the fish. 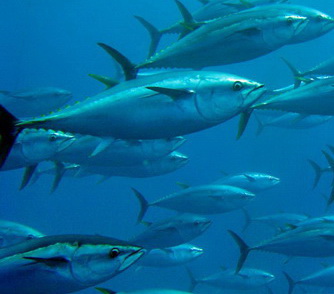 That the smaller tuna spawn in the Sea Slope is logical to the researchers. The typical hunting grounds of bluefin tuna are just north of there in the New England states and Canada. Smaller tuna therefore only have short distance to find the rich herring after the exhausting act of spawning. But these hunting grounds also attract the heavier fish weighing over 500 lbs that have spawned in the Gulf of Mexico in June/July and traverse the Slope Sea on their way without staying longer. One possibility is that large fish are able to arrive at northern feeding grounds earlier in the summer by taking advantage of their fast swimming speed and the 2-month difference in the timing of optimal spawning temperatures between regions. Alternatively, the Gulf of Mexico may provide better feeding or reduced predation for larvae, or the earlier spawning time may allow juveniles to achieve a larger size at the end of the first year, factors that may increase survival through the early life stages. The scientists additionally found that bluefins from the eastern Atlantic and Mediterranean also cavort in the new spawning area and mate there with fish from the west! This means the previously separate eastern and western management of bluefins must be reconsidered. The study was conducted by scientists at the National Fisheries Service of the United States (NOAA) and the University of Massachusetts, Boston. It can be found here: http://www.pnas.org/content/early/2016/03/04/1525636113.full.pdf
Previous post
Next post